The Isle of Wight Cantata launched its 2015 season on Saturday night with an uplifting performance at the Medina Theatre.

The choir had chosen two of the most popular and jubilant works in the sacred repertoire, Mozart’s ‘Coronation’ Mass and Haydn’s Te Deum, written only 20 years apart in late 18th Century Austria. Cantata was also set a daring test of its vocal skills: three unaccompanied motets composed by England’s Charles Stanford a century later. After weeks of Monday evening rehearsals, 82 singers pulled off the challenge magnificently. Indeed the more contemplative tone and a cappella setting of the motets provided an enriching contrast in the programme.

The Cantata isn’t resting on its laurels, though, and remains keen for interested Island-based singers to join it.

The Isle of Wight Cantata Choir is giving its next concert next Saturday, March 14, at 7.30 pm in Medina Theatre.

The works to be performed are Mozart’s Coronation Mass, three motets by C. V. Stanford and Haydn’s Te Deum.

The motets will be sung unaccompanied, creating quite a challenge for the choir of about 100 singers.

The other two works will be accompanied by a full orchestra.

In a move to encourage young people to develop an interest in classical music, the choir’s musical director Rachel Tweddle has sought out four young up-and-coming soloists to sing in this concert.

Mezzo-soprano Camilla Bull and tenor Christopher Hann are both Island born and bred and were pupils of Rachel’s before moving to the mainland and embarking on musical careers.

The other two soloists are soprano Jessica Broad and bass Robert Garland.

All four of these singers have already built quite a reputation. 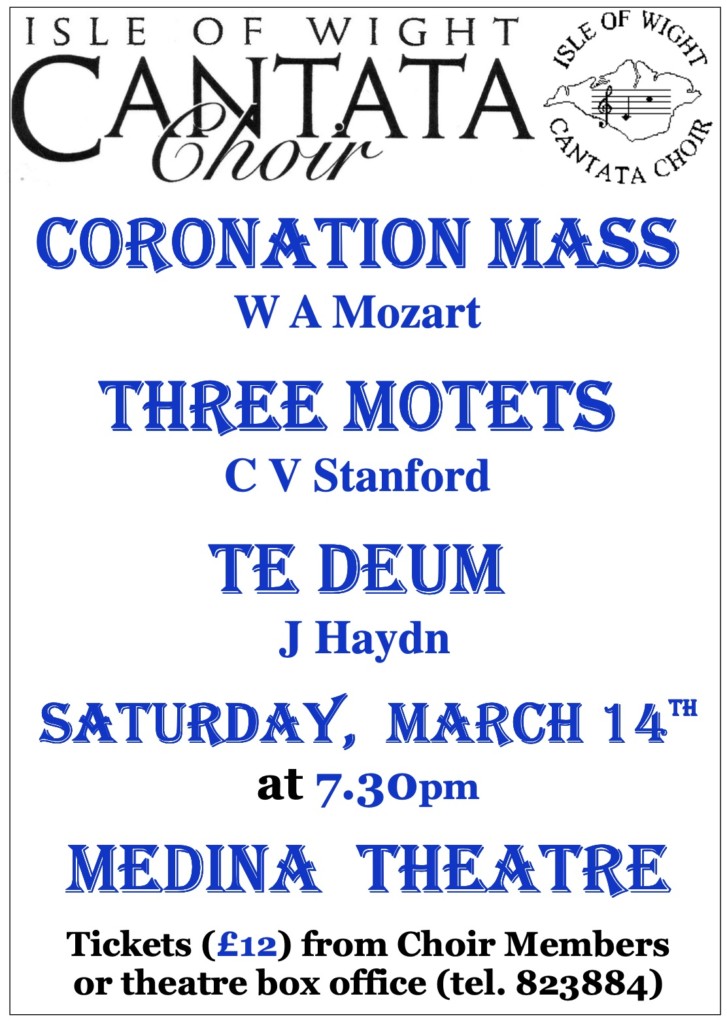